This October the School of Law’s M 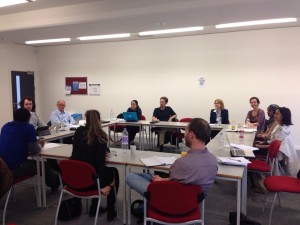 anchester International Law Centre (MILC) successfully relaunched the famous Melland Schill Lecture Series in Public International Law. The original series saw Miss Olive B. Schill of Prestbury (Cheshire) leave a bequest to The University of Manchester in memory of her brother, Edward Melland Schill, who died in 1916 during the First World War with a view to organizing a series of public lectures in international law. The Melland Schill Lecture Series run from 1961 to 1974 and included lectures by Professor Quincy Wright on the role of international law in the elimination of war, Professor Robbie Jennings on the acquisition of territory, Sir Ian Sinclair on the Vienna Convention on the Law of Treaties, and Professor Dan O’Connell on the influence of law on sea power. After a 40-year hiatus, MILC decided to revive these famous public lectures in memory of Edward Melland Schill, in keeping with Miss Schill’s original wishes. The original format of the lectures has been slightly modified: whereas before the speaker was invited to deliver a number of lectures in Manchester and then submit them for publication, distinguished lecturers now deliver a single public lecture, and the text of the lecture, and any multimedia material, is made available on the MILC website shortly afterwards.

On 14 October 2014, John Dugard, Professor emeritus of the University of Leiden, delivered the first Melland Schill lecture since 1974. His lecture entitled “Are existing states sacrosanct” attracted a large audience from all over the North West of England as well as many colleagues from partner universities. John Dugard is a distinguished international lawyer who has championed human rights throughout his career. He was a leading South-African opponent of the apartheid regime, a member of the United Nations International Law Commission, has served as an hoc judge on the International Court of Justice and was a Special Rapporteur of the UN Commission on Human Rights regarding the situation in Palestine.

The talk considered whether contemporary international law’s commitment to maintain the world order as it is, with as little change to existing state boundaries as possible, remains tenable in a world in which self-determination and ethnic identity are such powerful forces.  Noting the recent intensification of secessionist movements, from Scotland to Catalonia, Crimea to the forcible demands of the Islamic State; and the massive proliferation of states in the twentieth Century, Dugard spoke about the deficiency and unfairness of the current rules pertaining to statehood and the birth of states in international law. The current state of the law sees three principles: uti possidetis, territorial integrity and self-determination, all seemingly with equal weight under international law, asymmetrically applied without consistency. 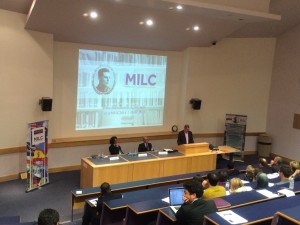 International law, designed to curb the proliferation of states in the interests of sustainability, clings to its traditional conservatism. The principle of territorial integrity in practice extends only to external challenges, although most attempts to change state boundaries now come from secessionist movements within the state. The principle of uti possidetis, Dugard explained, is flawed from inception as an international law principle. Its origins can be found in Roman law, as a maxim to be applied to property disputes. Thus its application to statehood and state boundaries is contrived, resulting in a respect for state boundaries, no matter how arbitrarily drawn, used by international law as an instrument of decolonization. The application of uti possidetis has been further muddied by the work of the Badinter Arbitration Commission, tasked with overseeing the European Community’s guidelines on the dissolution of Yugoslavia in 1991-1992. The Commission, in a move Dugard emotively labeled ‘absurd’, applied uti possidetis in this non-colonial context. Thus, the internal federal units of Slovenia, Bosnia-Herzegovina, Montenegro, Macedonia and Croatia were afforded statehood, whereas autonomous regions were not. The principle of Self-determination, seen to be a guiding principle of international law, endorsed by the United Nations General Assembly (Declaration on the Granting of Independence to Colonial Countries and Peoples, Resolution 1514 (XV) of 1960) and the Charter (Article 1, 55) amongst other instruments, is regularly restricted in practice. For example, the Organization of African Unity, at its first session in 1964, opted to apply the principle of uti possedetis, pledging ‘to respect the borders existing on the achievement of national independence’ (AGH/Res. 16 (I)). This certainly aided an orderly decolonization process, but nonetheless sent a clear signal to ethnic minorities that territorial integrity reined supreme. In spite of the many land injustices that have plagued ethnic groups in Africa resulting from the application of uti possedetis, the International Court of Justice (ICJ) later affirmed its application in the African context in 1986 (Frontier Dispute case, ICJ Reports 1986, p 554). 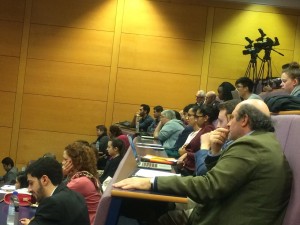 that the attitudes of states towards the principles of statehood are heterogeneous and inconsistent. This was made abundantly clear from the many and varied submissions by law advisors of nations before the ICJ on the legal status of Kosovo’s unilateral declaration of independence (Accordance with International Law of the Unilateral Declaration of Independence in Respect of Kosovo, Advisory Opinion, 22 July 2010, ICJ Reports 2010). Many argued that the principle of respect for territorial integrity extended to non-state actors within a State; whereas others asserted that the principle applied only to States, thus leaving the door ajar for secessionist peoples. The right to remedial secession as a last resort, in cases where peoples are denied a right to internal self-determination and are oppressed, was recognized by many states in the proceedings. Still, a significant portion opposed it, either denying the existence of a right to external self-determination totally, or accepting that it was permitted under international law, but that Kosovo did not qualify on the facts. Several declared that the recognition of Kosovo was sui generis, deeming the matter of state recognition a matter of policy, ungoverned by law.

The ICJ declined to clarify these competing positions in its opinion, choosing only to examine the question put before it: the lawfulness of Kosovo’s declaration of independence under general international law. That the matters of statehood, the recognition of states and secession are not governed by law is, for Dugard, unthinkable. He used his platform to rally international lawyers: we cannot sit idly by while the subject of statehood sees the diminution of the role of the law, and of the right to self-determination. He called for the criteria found in the 1933 Montevideo Convention on the Rights and Duties of States to be taken more seriously by third states in deciding to grant recognition to a seceding entity. Dugard concluded by promoting the creation of a new tribunal to determine whether an entity qualifies as a state. Its decision would not need to be binding decision, but would nonetheless provide much needed guidance. The lecture was followed by a lively discussion on the ability of international law to provide guidance on the birth of new states. 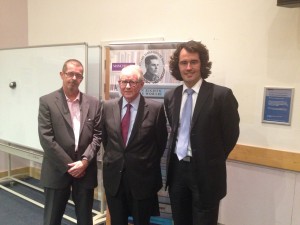 The second Melland Schill lecture will take place in autumn 2015.

The video of the lecture is available on MILC’s YouTube channel.

Elizabeth A. O’Loughlin is a PhD researcher at the University of Manchester School of Law, where she works on the European Research Council funded project ‘A Sociology of the Transnational Constitution’. She holds an LL.B in Law from the University of Leeds (2009-2012), and an LL.M by research in European, Comparative and International Law from the European University Institute (2012-2013). Her research interests fall within international law, international criminal law, constitutional law and human rights. Her current research explores the impact and influence of international law on the constitutional reform process and subsequent emerging constitutional practice of Kenya, focusing on the emphatic role of judicial actors at the national, supranational and transnational level.