Professor Rebecca Bennett invites us to question the practice of routine antenatal testing for Down’s Syndrome in the light of recent reports concerning new testing techniques.

All pregnant women in the UK and many other countries are routinely tested for Down’s Syndrome. This means they will undergo a blood test and scan that test for Down’s unless they ask to opt out of this test. If this test shows a high probability that their future child will be Down’s then they are offered a more invasive test e.g. amniocentesis that will give a more accurate picture of whether their child actually has Down’s.

So why do I have a problem with this? 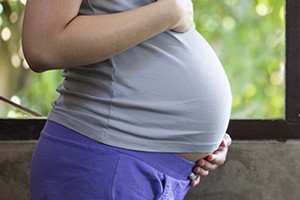 Well let me explain my worries about this a bit. Normally if we, as non-pregnant people, go for a test for a health condition, for example HIV or a genetic disorder, it is felt that it is very important that this is a voluntary test, one we have chosen on the basis of accurate information about the test, to have.  We see this as important as this freedom to choose how our lives go, including what tests we have, what medical treatment we have is considered essential to our wellbeing as humans. The law reflects this allowing us to refuse any medical treatment even treatment that is life saving. The classic example here is, of course, the Jehovah’s witness who refused blood products.  This fundamental respecting of choices also usually extends to pregnant women with women having the right to refuse treatment even if this refusal will harm their fetus and the child that fetus would become (so long as they meet the usual tests for capacity).

The routine test for Down’s Syndrome is a very different kind of test from these usual tests that we can choose, on the basis of our own deliberation to have or refuse. I would argue that rather than empowering women and giving them more choice and control about their pregnancy, routine testing for Down’s reduces and even manipulates their choices. The first thing I need to be clear about is that I have no problem with anyone making the choice that they don’t want to continue with a pregnancy because the fetus has Down’s. I think women should be able and empowered to make choices about their bodies and their lives that are the right choices for them based on accurate information. This is, of course, why we put so much emphasis on people’s right to choose how they live their lives and what happens to their bodies.

The problem I have here is that routinely testing, where women have to actively ‘opt out’ of the test is, simply not a free choice.  We make a test ‘routine’ and opt out rather than ‘opt in’ in order to increase the numbers of people who will be tested. So, as a result, some people who would never have chosen to be tested in an opt in system will, by design, end up being tested in an opt out system. This is because opting out of a test that is seen to be routine and thus recommended may not be an easy thing to do.

This seems quite different from a situation where we are respecting individuals’ choices about being tested.  Routine testing is simply much more  coercive, directing women towards a particular course of action which may not be one, on reflection, they would have chosen.

So this is my problem.  We are treating pregnant women differently when they are tested in this way and quite clearly directing their choices. This is something that would not be acceptable around other genetic testing.

But, might this be a case where the usual standard of consent and voluntariness doesn’t apply? It is often argued that, in this case, we are justified in taking this slightly different approach for a couple of reasons:

Isn’t it better that we try and test everyone so no-one is missed and all women can have this information about their pregnancy and make their own mind up?

The argument here is that routine testing gives women important information about their pregnancy and thus routine testing empowers women and informs their choices.  There are two serious problems with this suggestion.

First, it seems that routine testing limits rather than enhances women’s choices. As I have already shown there is clear evidence that women are being tested who would not have volunteered for the test. Also because routine testing is often seen as a way of giving women carrying Down’s babies access to terminations, those who get a positive result may feel further pressure to terminate a pregnancy. This kind of routine test sends a strong message that: “Because you have a test [during pregnancy] you think that it must be a terrible thing if it [a diagnosis of Down’s in the fetus] happens.”  Now, of course, it might be a terrible thing for some people to find out their fetus will have Down’s but it is a condition where this may not necessarily be the case.  Routine testing for Down’s sends a very negative message about Down’s that may not apply to all women and will inevitably strongly influence women’s choices around these decisions.

Second, for obvious reasons routine testing for Down’s is usually justified as a way of giving women information about their pregnancy rather than a route to termination. However, routine testing is not an effective means of giving women information about the test and what it entails. In fact it’s been reported that in the case of routine Down’s testing  ‘levels of knowledge adequate for decision-making are not being achieved”[1] and that “16-26% don’t know why they are being screened”[2]

As a result it seems that if our aim is really to enhance the choices of women around Down’s syndrome giving them the information and freedom to make the choice that is right for them, then routine testing is not an effective way to do this. I would suggest that information giving and opt in testing would seem to uphold these ideals better.  With opt in testing women are likely to feel more able to make a free choice, not only about whether they want the test, but also what to do about a positive result.

We do make exceptions all the time to prevent harm to others e.g. mandatory quarantine and treatment (e.g. Ebola), routine childhood vaccinations and banning smoking in public places.  Isn’t this a similar case of harm prevention where the usual rules do not apply for good reason?

While it might well be true that we often feel justified in compromising individuals choices to protect others from harm it is difficult to understand any sense in which harm is prevented by identifying more Down’s pregnancies. It is true that most women who receive an antenatal diagnosis of Down’s decide to terminate, around 92% in fact, but it is too simplistic to assume that these terminations prevent harm to anyone. No child is ‘saved’ from having Down’s Syndrome, she’s either born with it or not born at all.  In fact it seems likely that any Down’s children brought to birth are actually likely to have a life they value as much as anyone else does. So identifying Down’s in pregnancy may prevent that child being born but if that child is brought to birth there is no sense in which that child, with a life it is likely to value, has been harmed by this decision not to terminate.

There is much more of a case to say that routine antenatal testing for HIV, for example, can be justified on the basis of preventing harm as identifying HIV positive women in pregnancy can allow measures to be taken that reduce the risk to a resulting child.  However, this is not the case with Down’s. Early knowledge does not allow prevention.

If parents see having a Down’s baby as a harm to their own lives then they should make the decision that is right for them based on an accurate understanding of the issues they face.  They may, however, conclude that it is a termination in these circumstances that is a harm to them, something they would not wish for, showing the need for an undirected choice.

As you will see from the video lecture that accompanies this blog things are further complicated by a new less invasive test for Down’s which will be even harder to opt out of.

It is important that we debate these issues around the manipulation of women’s choices and decide which of our aims should win out here: do we really want to enable women to make the choices that are right for them or do we want focus on reducing the number of children born with Down’s even if this might not be the right choice for everyone?

Professor Rebecca Bennett is a member of the School’s Centre for Social Ethics and Policy. The Centre provides a series of online and face-to-face programmes for students, researchers and professionals.